What if the latest miracle in regenerative medicine only required you to eat 250 fewer calories every day for the rest of your life?  Would you do it?  By the growing rates of obesity in the U.S., the answer is probably not.

Regenerating Organ Function Is Possible
Nonetheless, a recent research article demonstrated that people who were part of the two-year CALERIE study had dramatic regeneration of their thymus gland if they could reduce their calorie intake by 250 calories per day for two years (1).   Why is this important?  The thymus gland is the key to training your immune system to recognize new pathogens (like the virus that causes Covid-19), but also it is the most sensitive organ to aging in the body.  Unfortunately, by age 40, the thymus gland is no longer functional in most people.  The result is your immune system has increasingly reduced activity as you age.  So, if you can regenerate the thymus gland by restricting calories, what other organs might benefit from calorie restriction?  For starters, those other organs might include the heart, the brain, the pancreas, the liver, the kidney, etc.

Why Calorie Restriction Works
The reason why is because calorie restriction activates AMPK, which is the master regulator of your metabolism and, ultimately, your longevity (3).  Conversely, if you increase your intake of calories, you inhibit AMPK activity, and any benefits from prior calorie restriction quickly disappear (4).

So why is simple calorie restriction so difficult?  The primary reason is that you are always hungry.  This problem is solved when you follow the Zone diet.  The Zone diet allows you toreduce calories without hunger, but only if you balance macronutrients (protein, carbohydrate, and fat) at every meal to manage the hormones that control appetite (5).  How long can you follow the Zone diet?  Studies with type 2 diabetes indicate at least five years, but more likely for a lifetime (6).

The second reason is that long-term calorie restriction is difficult to maintain is because the visual benefits like fat loss are slow.  In the two years of the CALERIE study, the participants reduced their total calorie intake by nearly 200,000 calories.  The standard equation states that cutting out 3,500 calories will result in the loss of one pound of fat.  Using that equation, youmight assume that those individuals in the CALERIE study would have lost 57 pounds of fat during the two years of the study.  Unfortunately, the average fat loss was 11 pounds or less than half a pound of fat per week.  Most individuals simply get discouraged by such slow changes and then go back to the old dietary habits that inhibit AMPK activity, thus preventing the regeneration of aging organs.

A Pathway to Regenerative Medicine

The future challenge for medicine is not finding new drugs but understanding how to control our metabolism to activate AMPK.  That’s the true definition of biotechnology.  The best way remains calorie restriction, but only if you can do it without hunger or fatigue.  The Zone diet makes that feasible. 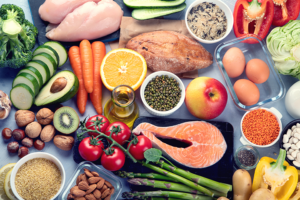 Insulin resistance is the driving factor for many chronic disease states, including obesity, diabetes, heart disease, and Alzheimer’s.  Yet the level of

There are two sides to medicine.  One side is treating disease; the other side is maintaining wellness.  We currently define disease by